The rise of the Digital Humanities, and its increasing relevance for the study of literature, is by now well established. As Laura Mandell so ably demonstrated in this very space, the kinds of questions that the digital can raise for literary scholars are multiple, complex, and compelling — and the established organizations in the field, particularly the MLA, are beginning to take notice. All of the markers of disciplinary integration are solidifying, from establishing conferences, to launching journals, from hiring in the field, to building new programs.

For those among us trained in literary studies, the digital turn, as it is called, most frequently finds its way into our discipline through digitization, mark-up, and text analysis.  The literary digital projects that come most readily to mind are comprehensive archives (digitization) like the Blake and Whitman archives, encoded texts (mark-up) like the Orlando project, or tools like Voyeur (text analysis). These kinds of resources are invaluable in the field, and the establishment of protocols and systems for structuring our work in these areas has advanced dramatically, and taught us much, over the past 20 years or so.

But, just as the literary scholarship of the later 20th century worked hard to expand our conception of what constitutes a “text,” the early part of the 21st century has been marked by work that expands our conception of digital literary studies. The emergence of DH has meant many things, but among them is a broadening of the scope of our inquiry — moving beyond the integration of digital methods into the core of the discipline, and instead experimenting with digital tools in some of its more remote regions.  I deliberately employ a spatial metaphor here, because it is the turn to the spatial humanities, and its importance to literary study, that I want to outline in this piece.

Literary scholars, have, of course, a rich relationship to space as metaphor.  As the Introduction to the influential volume The Spatial Humanities explains,

Humanists are fully conversant with space as a concept or metaphor—gendered space, the body as space, and racialized space, among numerous other rubrics, are common frames of reference and interpretation in many disciplines—but only recently have scholars revived what had been a dormant interest in the influence of physical or geographic space on human behavior and cultural development. (vii)

The work of Michel Foucault, Henri Lefebvre, and Michel de Certeau can begin to theoretically re-orient us to the integration of actual physical spaces into literary studies.  As Foucault claimed in “Of Other Spaces”,

The great obsession of the nineteenth century was, as we know, history: with its themes of development and of suspension, of crisis, and cycle, themes of the ever-accumulating past, with its great preponderance of dead men and the menacing glaciation of the world …The present epoch will perhaps be above all the epoch of space. (np)

For Foucault, the prioritization of space was a direct result of his contention that we are in “the epoch of simultaneity.” In contrast to the convention of linearity in historical narratives, a “long life developing through time,” the analysis of space allows us to recognize that we “experience the world” as a “network that connects points and intersects with its own skein.” In 1974, Henri Lefebvre initiated a significant theoretical challenge with The Production of Space, a work that in many ways enacted and literalized the heretofore metaphorical notion of space, network, and simultaneity proposed by Foucault. For Lefebvre, in order to animate a theoretical concept like “space” it needed first to be freed from its rigid geometrical history in the field of mathematics, its status as physical space, but also its purely conceptual and entirely imprecise concept of mental space that emerges in the field of philosophy. Rather, Lefebvre coins a third term social space, an analytic category that proposes that  “space is never empty” (154) — it is produced by social actions and must be read and analyzed as a social production. Michel de Certeau, of course, in The Practice of Everyday Life, demonstrates one method for enacting that social space by "Walking in the City."  While structures like government, commerce, and institutions deploy 'strategies' for constructing, managing, and controlling the space of the city, the individuals within it navigate via 'tactics,' short term, pragmatic actions that defy the logic and control of strategies, bringing the action down to streetview from the satellite-like view from the 110th floor of the World Trade Center.

So, how can we bring together and take seriously these more complex theorizations of space as simultaneously metaphorical, physical, produced, strategic, and tactical?  The study of literature has always, to at least a modest extent, involved the plotting of places.  Readers and critics, armed with imaginative maps, track characters from room to room, or city to city, or across oceans, or up mountains, or, or, or.  But the map as a concrete object is also an important literary technique.  We need only look to the original edition of Robinson Crusoe in 1720 to see that the map as textual apparatus is about as old as the novel itself.  Indeed, countless worlds of fantasy (C.S. Lewis’ Narnia and J.R.R. Tolkien’s Middle Earth come most readily to mind) find themselves sketched out in the form of maps and inserted into literary works. We know that maps and spatiality are things that enrich literature. What we are beginning to understand is how to capitalize on those same spatial skills in our analysis.

Franco Moretti is perhaps the most widely known proponent of spatially defined literary criticism.  An advocate for “distant reading,” Moretti begins his analysis of literary maps with a simple question: “what exactly do they do? What do they do that cannot be done with words?” (35). Through a reading of the village walks in Mary Mitford’s Our Village, Moretti argues that mapping allows the critic to extract elements from the narrative flow (53) and to discover new underlying patterns as a result.  In the example of Our Village, Moretti argues that the text's spatiality challenges the 19th century’s “transformation of rural space produced by parliamentary enclosure” (38) and instead enacts the “the older, ‘centred’ viewpoint of an unenclosed village” (39).

Clearly, such spatial analyses would produce useful readings of a myriad of literary texts at the level of primary analysis. But what of the discourses that surround literature?  One such meta-critical project that serves as a model for such endeavors is the Mapping the Republic of Letters project, “a collection of case studies exploring the exchange of ideas within the Republic of Letters from a number of different angles.”  This project, like most in the Digital Humanities, is both experimental and analytic.  On the one hand, the collaborators on the project are engaged in developing models for visualizing historical data, primarily the intellectual, epistolary, and social circles of a collection of writers.  On the other, these models provide structures from which new analytic conclusions can be drawn, and more effective data modeling strategies can be undertaken.  Progressing from a fairly simple linear map of correspondence, the project now employs several sophisticated visualization techniques that facilitate a style of research unavailable to literary historians even a decade ago.

Both of these examples show that spatial and mapping technologies can supplement the conventional methods of literary study.  But there is a third, and very exciting, development in spatial media that warrants attention for the scholar of literature: new spatial and locative technologies are emerging as platforms for literary production.  New stories are being built and told in new ways via new media; spatialized and locative technologies are an important part of that development.

Augmented reality, the overlay of digital information on existing physical objects and spaces, is an exciting development in the world of digital writing and an excellent example of spatial and locative affordances.  Children's books have been among the first to deploy technologies of augmentation.  The Fantastic Flying Books of Mr Morris Lessmore1, for example, can be augmented with an iPad app.  When activated, the rear camera of the iPad is turned on, creating the illusion that you are looking through it at the book (or flying books) behind.  Illustrations suddenly become moving animations; while other pages coach the reader to "look around" to create the illusion of Lessmore's library wherever you happen to be. These are the "new" texts that are being "written," and the texts that will soon demand of literary scholars a method of critique and analysis that can account for them.

Moving even further from conventional print, away from the book and into the city, the Museum of London has developed an impressively robust, locative, augmented reality app.  In it, historical photos from the museum's collection have been geo-located.  The result is that a person with an ipad can activate the app, see "through" it in the same way as the Lessmore app, and superimpose historical images over contemporary, physical space. The example below shows what a user might see on a visit to Buckingham Palace, re-animating an entire history of suffrage activism and placing the viewer not at the end of a distant historical trajectory from it, but rather on its very same ground, in its very same space. This is Foucault's skein in the epoch of simultaneity, Lefebvre's social space, de Certeau's tactics. The narrative possibilities for this type of technology are heady. Imagine an augmented edition of Dickens' walks through London, or of Laurence's Manawanka, or of Wojnarowiscz's Manhattan. 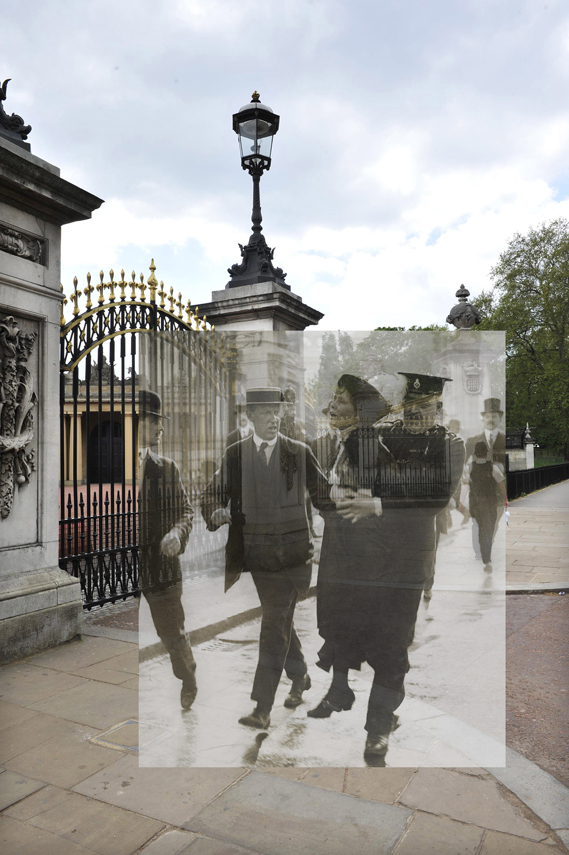 As Marshall McLuhan argued, "Our time is a time for crossing barriers, for erasing old categories, for probing around.  When two seemingly disparate elements are imaginatively opposed, put in apposition in new and unique way, startling discoveries often result."  Geographic space and imaginative writing are just such disparate elements, and the nascent but emerging discoveries of the spatial mash-up are, indeed, startling.

Mapping the Republic of Letters

Maureen Engel is the graduate coordinator for the University of Alberta's MA program in Humanities Computing.  She is a co-investigator on the Edmonton Pipelines project (edmontonpipelines.org), a contributing network investigator on the Grand NCE, and acting director of the Canadian Institute for Research Computing in Arts.  Formally trained as a textual scholar, her background is in cultural studies, queer theory, and feminist theory. Her principal research area is the spatial humanities, and the intricate relationships that inhere in and develop from the concepts of space, place, history, and narrative.

1. Here I must thank my colleague Margaret Mackey, a scholar of reading and literacy, for introducing me to the wonders of the flying books.